“The Importance of Writing Carefree Blackness™,” by mildmanneredmuse

Post-NaNoWriMo, I’ve volunteered beta-reading services. It combines my love of reading with my love of asking too many questions. The push for diversity in publishing has created attempts at diversity in writing, and thus requests for diverse beta-readers.

Of my eleven beta-reads, eight of them were given to me based on my blackness perspective. I am not upset about this at all. If you’re not black and you’re making an effort to include black characters in your things and want to make sure you’re not being the worst possible person about it, good on you. Of those eight manuscripts, five of them have black main characters, and four of those have struggle-based narratives.

“The struggle™,” for anyone unaware is basically living life through the impacts of institutionalized racism. Sometimes this means arguing respectability politics and combating “too black” and “not black enough” lines in our own community. Sometimes it means dealing with the backlash of promoting our own standards of beauty. Sometimes it’s having to explain and defend our social justice movements. Sometimes it’s living through the aftermath of a race-based shooting. Sometimes it’s the politics involved in choosing a PWI vs an HBCU. And sometimes it’s swallowing the mountain of micro-aggressions and casual racism only we can see worked into our daily lives.

I’m noticing white writers seem to lump together slavery and the Civil Rights Movement of the 1960′s. It’s probably because those are the standard narratives for the black experience as taught in grade school. And so writing black characters has become a reflection on the pain associated with blackness. And writing these things becomes a way to illustrate one’s own “wokeness” or “hipness” or “down-with-the-causeness.” You get my very uncool point.

Writing with a focus on this aspect of black life, while important on some level, is damaging on another. Black women especially are saddled with the resilience stereotype: that we have been through so much without our backs being broken and we can continue to do so there is no real rush to relieve us of our burdens. Our strength is a defining characteristic and without something to fight, it is useless. Without something to overcome, what remains of our personality?

It’s also true that many of our well-known pieces of literature are struggle-driven narratives. The Color Purple. A Raisin in the Sun. Beloved. Native Son. Literary culture (with its broad, white base) is endeared to them for their dramatic profundity, the skill with which these authors paint true ugliness so deep it becomes beautiful. And for some reason, we are stuck in this place. The only stories people know to tell about us, are about our pain.

Now if you’re really woke, you’ll notice the glee with which black women entrenched in the fight greet images of black whimsy. It goes beyond the standard-issue “the laughter of children is a joy forever” reaction. We are seldom represented outside of our own circles as people capable of happiness or frivolity. Watching us dance at a protest literally gives us energy. It’s why Lupita going from Patsey in 12 Years a Slave to Maz Kanata in The Force Awakens (and heavens to murgatroyd, John Boyega) gave black girl nerds LIFE. It’s why NBC’s production of The Wiz Live! was hailed in the community as it was. What a novelty to not see ourselves in roles where blackness isn’t an armor or a tragic diary entry. This is what it looks like to have fun. 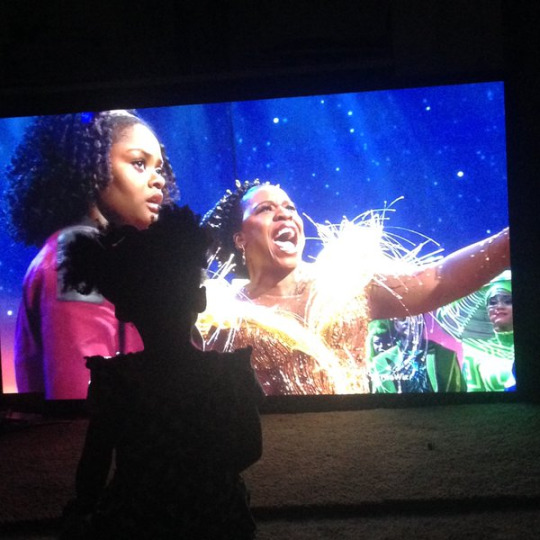 And it isn’t just about black people reading black representation. Allowing us happiness in literature is another way to humanize us to non-black audiences. This is a thing that shouldn’t need to be facilitated, but the world’s a hard place, so here we are. We live in a society where a white child’s obsession with a toy gun is treated as a sweet and perfectly innocent rite of passage in a beloved cinematic Christmas classic. A black child with a toy gun is automatically deemed a threat, and he is executed for it. Black lives are rarely envisioned innocently or without tension. As such, black children are seen as having no capacity for imagination what with all that serious, bitter blackness within them. The reasons for this are myriad and complex and deeply rooted in centuries of problematic racial depiction. But literature is in a unique position to address and aid in the repair without volatility.

So when you’re doing your research on how to write us, it shouldn’t be just on how to non-offensively write our dialect or describe our skin tone without food analogies or how many times is too many times to use “nigger.” If you’re going to write diverse characters, that means giving them the full spectrum of humanity and not just using them as statements and plot devices. And humanity for black characters – women and girls especially – means letting them dance or build airships or be alien pirate matriarchs or battle dragons for once instead of the patriarchy.

2 comments on ““The Importance of Writing Carefree Blackness™,” by mildmanneredmuse”

This entry was posted on February 25, 2016 by lorimori and tagged fan fiction, race, representation, writing.