“The Norwegian Prime Minister as the Anti-Jed Bartlett in Occupied,” by theshatnerian

In this near future, Norway is Europe’s largest supplier of oil and gas and the EU is not ready to make the switch so quickly. So they ask Russia to take control of the oil production facilities until the levels have returned to what they were before the Green Party was elected. Reluctantly, the prime minister agrees, fearing resisting the arrangement would mean heavy casualties in a war he could never win.

The occupation is a quiet one, beginning with the Russian ambassador requesting changes to Norwegian policy until events conspire to inflate this “temporary situation” into an all out confrontation. The series does an excellent job juggling the political drama with the personal as it impacts the lives of the main characters.

But it’s the portrayal of how the prime minister reacts to the crisis that is most fascinating. Jesper Berg, played by Henrik Mestad, throughout the series is portrayed as a fundamentally decent man who has been boxed in by forces larger than himself. Every decision he makes, he makes with the aim of preventing violence.

And yet every decision he makes is also the wrong one.

It’s a stark contrast from how leaders have been portrayed in other TV shows.

The West Wing’s President Bartlett was a progressive dream of a president. If he was in Berg’s shoes, one can just imagine he’d send the Russians packing with little more than a lengthy, condescending Aaron Sorkin speech.

And House of Card’s Frank Underwood would likely either have sex with and/or murder the Russian Ambassador before one Russian even came as close as Svalbard.

24′s President Allison Taylor’s presidency was viewed as one with integrity as was her predecessor David Palmer. And they would just put Jack Bauer on it and he’d have it taken care of within a day. 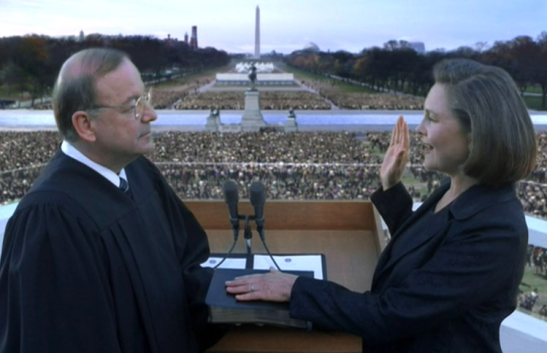 It’s hard to imagine an American TV production allowing their fictional president to ever be outfoxed by an opponent, or lacking integrity, or loyalty.

Other countries aren’t so reluctant. In the British TV series Black Mirror, the British prime minister is forced to have sex with a pig on live TV in order to save the life of a princess. Despite numerous attempts to find the princess’s kidnapper, he relents and the deed is done before the reveal that it was all part of some elaborate artistic statement. The princess’s life was never in danger and she was released to the empty London streets before the Prime Minister’s, er, show which is broadcast to an entire nation.

On the Doctor Who episode, “The Christmas Invasion,” another fictional British prime minister makes the decision to shoot down a retreating alien ship, rather than let it escape with a warning. Furious with Prime Minister Harriet Jones for the unnecessary loss of life, the Doctor brings down her own government with the six simple words, “Don’t you think she looks tired?” (a nod to a similar thing done to Tony Blair)

While Harriet Jones was heroic as a Member of Parliament in an earlier episode, as a prime minister she was considered ruthless and without compassion in light of her actions in the Christmas episode.

Is there a reason why other countries are willing to create fictional leaders who are portrayed so humanly whereas fictional American presidents are so often shown as great men and women.

It may have something to do with American exceptionalism, a view of the United States as having a unique character due to its emphasis on personal liberty and democratic ideals. But other Western nations have freedom and democracy in various forms and, generally, they don’t see themselves as unique in the world, simply another player on the world stage. Some nations have more influence than others because of their wealth or armies but generally speaking, citizen of America are no more “free” than citizens of Sweden or France. But perhaps because of the unique democratic system used in the U.S.A. with its executive branch, the president in pop culture must be seen as uniquely competent and wise (real life 2000-2008 notwithstanding).

And this is not to say some fictional presidents are not shown to be buffoons or otherwise less than ideal. But, in general, fictional American presidents tend to more like Independence Day’s Thomas Whitmore, who saved the world than Dr. Strangelove’s Merkin Muffley who failed spectacularly in that task.

When it comes to nations outside the United States portraying their leaders, more often than not, they are just as human as the rest of us.

This entry was posted on February 18, 2016 by lorimori and tagged 24, Black Mirror, doctor who, fan criticism, House of Cards, Occupied, The West Wing, transcultural fandom.