Curator’s Note: We’re not dead! It’s just been end-of-the-term season here at The Fan Meta Reader, so we’ve been a bit distracted.

The English language centres masculinity and maleness as a default position. Man – its our word for our species, it’s a suffix that denotes a specific role (chairman, layman, spokesman, ). It could be argued that this is just a linguistic quirk, that it is not evidence of an inherent sexism in the culture that produced and used this language. I am not going to make that argument. I want to approach this use of the word ‘man’ to signify all of human kind from another perspective, the idea of something ‘hiding in plain sight’.

The word for woman is just a modified form of man, it still contains that term. As does human. Hearing this syllable over and over again, we forget that in its standalone form it is not gender neutral. We have very specific socially and culturally constructed ideas about what a ‘man’ is, although it is as well to remember that they are always shifting and open to challenge. When some of the earliest comic book creators started thinking about their heroes, they named them Superman, Batman. An easy short-hand for new readers to know what they were getting – super powers in the first instance, and a night-staking man in wings in the latter. But since we have become so used to a word with the suffix -man being used in a gender neutral sense, people have managed to forget that these are very gendered approaches to heroism. This is the invisible manliness that is all too visible.

In this model, femininity becomes something that is added to someone, measured against the assumed neutrality of invisible masculinity. Just as wo is added to man. By example, I want to discuss the newest female superhero to appear on screen. The trailer for the new series of Supergirl on American channel CBS arrived this week. And immediately comparisons to the SNL (Saturday Night Live) sketch about Black Widow were being bandied about the internet. The SNL sketch turns Black Widow’s story into a romantic comedy. There’s many reasons My Super Ex-Girlfriend (2006) was a terrible film. One is that the idea of a woman who is already confident and self-assured is out of place in a genre in which women generally go on a journey of self discovery to solve their major life problems. The SNL skit foregrounds and critiques the idea that women are only interested in romance on screen, the trope that relationships solve all other problems in women’s lives, and that all women in film must be part of a romantic plot. Supergirl, however, has all the trappings of the romantic comedy, but few of the drawbacks, according to this trailer.

Supergirl, Cara (Melissa Benoist), hates her job because her boss is something out of The Devil Wears Prada (2006), a sharp Calista Flockheart performance here. She is close to her sister, and finds it difficult to talk to cute guys with out babbling. 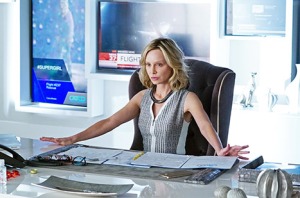 She is unsure what she wants from life. So far, so rom-com. Yet, Cara decides to give up on ‘normality’, which is what she thought she wanted, and take on the responsibilities and awesome perks (like flying) of becoming a superhero. She experiences condescension from men in the government, her male friend thinks she’s a lesbian because she won’t date him, and the boss gives her a feminist lecture on reclaiming the word ‘girl’. The gender politics is very, very clearly stated. The show has instantly been labelled ‘girly’.

The Dark Knight trilogy (dir. Christopher Nolan) was not instantly called out as ‘manly’ in that same derisive tone. In fact, a man who is manly is generally considered to be doing something positive. Likewise, boyish – usually paired with the phrase ‘good looks’. Academic types and fans have discussed the ‘hyper-masculinity’ of Bane, the symbolism of the Joker’s cross-dressing, the sacrificing of the romance narrative for justice in the rescue of Harvey Dent. But, as I addressed previously, when the tone of a superhero narrative gets darker and more violent, it becomes associated increasingly with maturity. It gets taken seriously. Supergirl is bright, colourful, upbeat. It is already not being taken seriously, despite the serious themes it addresses. It is ‘girly’.

Arrow (2012-current) is a current superhero narrative that is blending these two poles very well. There is darkness and violence from Oliver Queen (Stephen Amell) as the Arrow himself, and the Canary (Caity Lotz). There are romantic and family dramas played out in daylight hours, often by Felicity Smoak (Emily Bett Rickards) and the Diggle-Michaels (David Ramsey/Audrey Marie Anderson) family pairing. The main characters are involved in both sides of the action; gender divide is acknowledged, but critiqued. This team ensures that Oliver retains an emotional awareness that hyper-masculine models of violence often excludes. Oliver learns to respect Felicity’s brand of cerebral heroism, and gets called out for making her his PA. Another important aspect of the Canary’s role, is that by targeting rapists she reminds the audience that the experience of crime can be gendered, so we should not forget that fighting it can be too. We now have an increasingly diverse roster of heroes, in terms of gender at least, and audiences can now choose between representations of hyper-manly, mixed gender teamwork, or feminine.

The purpose of this blog is to address masculinity, but that can be hard when cultural standards condition us to view masculinity as a neutral position, and only femininity as something visible. We can instantly see the ‘girlyness’ of Supergirl and the SNL skit, these short films have been deliberately constructed and coded. So have all the male superheroes; a lot of work goes into making them look masculine, it’s just that bit harder to see. When we do see it is when women do the same thing as a man, and suddenly she becomes ‘manly’. Recent online criticism of Charlize Theron’s look and role in the new Mad Max film Fury Road has followed this pattern. Yes, Supergirl is girly, but don’t forget that Batman is manly, and that its all a social construct anyway.

This post brought to you by the Felicity Smoak Appreciation Society.

“The Invisible Man(liness)” ©Eva Hayles Gledhill, originally posted on 14 May 2015

One comment on “The Invisible Man(liness), by Eva Hayles Gledhill”

This entry was posted on May 18, 2015 by lorimori and tagged arrow, supergirl, superhero genre.